The Story - AGAIN (said in whiney voice) and New Hobby

I've taken up a new hobby, watercolor painting. I have messed the last year with a little journal, drawing and adding some color. I decided to take a class in mid November. Now I'm hearing the words "the Story" again and again in the painting world. I hear "the story" in reenactment, in NAI, in church, but painting?  I remember when I took some art classes eons ago the important word when creating a painting was composition, now it's"the story". A painting should draw your eye in, wonder around and tell a story.  It seems composition and the story are almost interchangeable. Do a search on YouTube for painting compositions and you'll see what I mean.  So here are some paintings that tell "stories". Love this stuff!!

Some I'm hoping someday I'll be good enough to tell a story with a painting. Right now, like all storying telling, I'm in the practice, practice, practice part. Here is a painting that I did six times and still need to work on highlights and shading and waves and..... well practice!
﻿

As I wrote the above title it reminds me of postings on eBay, "Victorian, Wedding, Goth, Steam, pin up look alike" they cover every angle to get you to "look". However bare with me and see how this bonnet works for both. Originally I made the bonnet to go with an early 1860's gown

Pictures of bonnet and the book I received inspiration from. 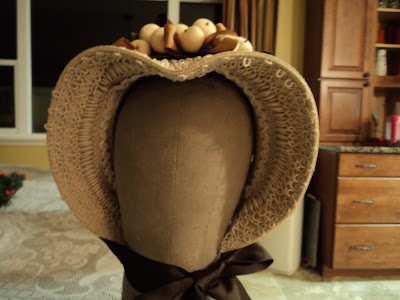 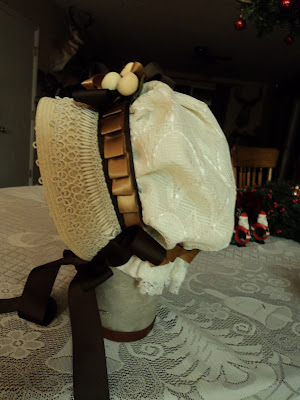 Now for the Regency look. I did not like the bonnet I had to go with my Regency gown. I was bemoaning the fact to my daughter. I had the above bonnet out on the table. I liked the way it went with my down & dirty brown Spencer I had made using American Duchess tutorial but wrong, wrong, wrong time period. My daughter picked it up and plopped it down on my head like a muffin cap, tied the ties in back, tucked the tails up in the bonnet and voila a Regency bonnet. 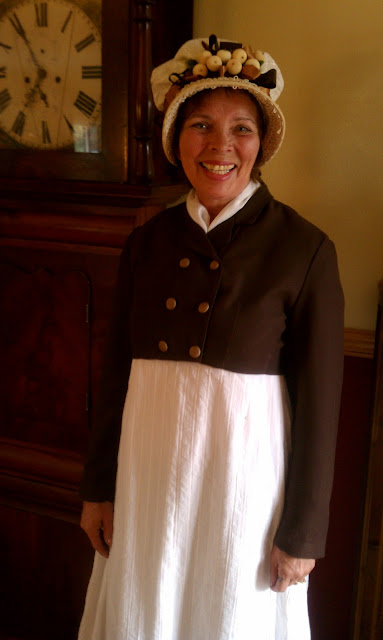 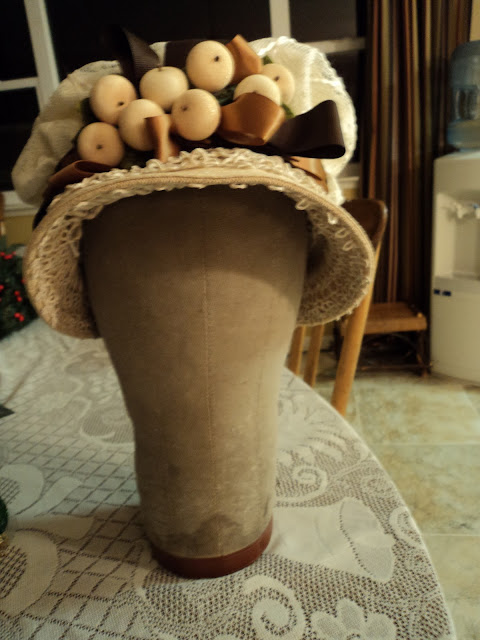 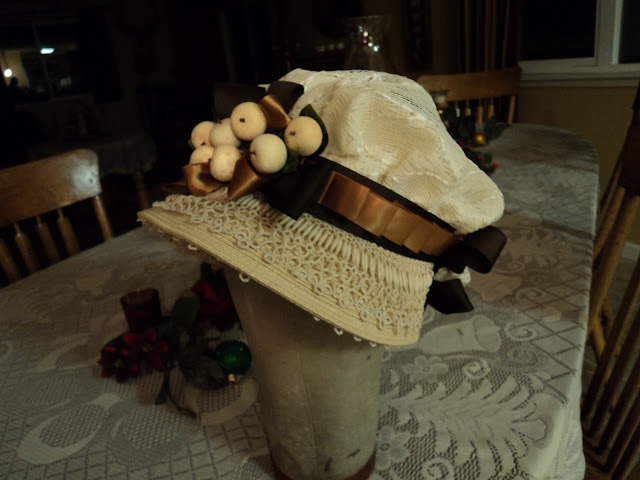 The gown was made several years ago. I used several gowns as reference to get the V neck however I did get the neck a little wide so I fill it in with a kerchief. Although I've noticed on several fashion plates they seem to bare a little more than I am comfortable doing. I choose the V neck over the typical Regency rounded neck, puffed sleeve look. I feel I'm too old for puffed sleeves and wanted a neck a little more flattering to me. ﻿


So now you see where the V neck came from, the rest of the dress I used left over scraps of material. Again I complied the sleeves and bottom from several fashion plates to get the Rengency look.﻿﻿﻿﻿ 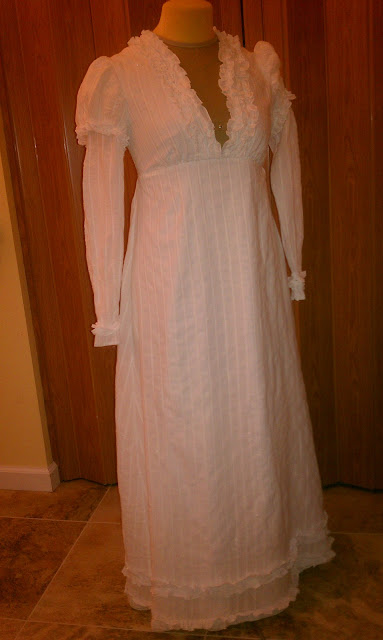 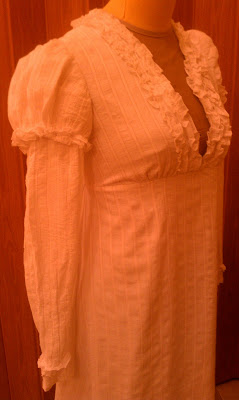 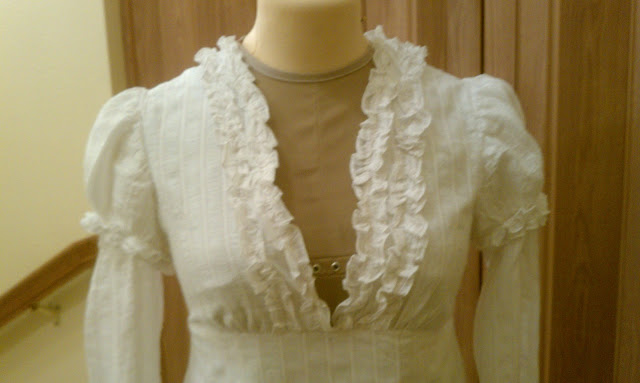 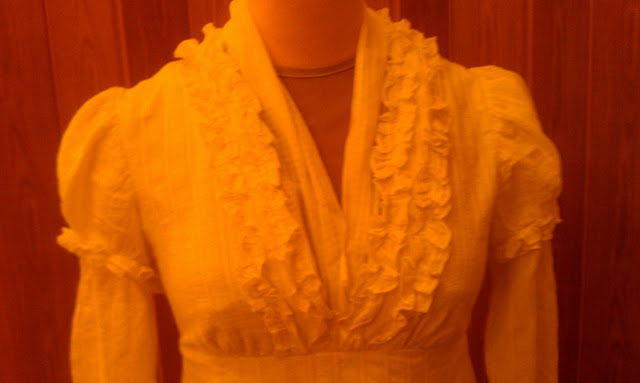 Email ThisBlogThis!Share to TwitterShare to FacebookShare to Pinterest
Labels: Projects

Learn to Gig in a Working Guild

This past October I went back "home", home being the renaissance guild of The House of Swindon. It's been a long time since I have been able to play, however "play" is a misnomer as we are a histoic guild and expected to work. We are the household of the Rutland family, living in Queen Elizabeth I's time period. The Dowager Duchess of Rutland, Bridget Manners,  is on the prowl for a new husband and the newly widowed Francis Russell, Earl of Bedford is enticing.

If you want to hone your skills to work with the public find a good historic guild and learn how to gig or improv. Work with the others in the guild and build your character as the public watches and asks questions. There are guilds out there who mostly "play" and then there are guilds that base their characters on history. Do your research on each guild, interview them, go and see how they work together in the guild yard in front of the pavilion and in back where the public is not allowed, go tho their meetings. Find one that fits you, join, have fun and learn history! 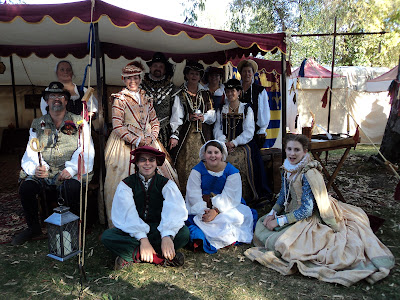 Along with being with your guild you always run into old friends.

The Nevada Museum of Art opened their current exhibit, The Light Circus": Art of Nevada Neon Signs . They asked me to model, I asked what to wear, they said "whatever".  Now the interpreter in me was telling me the history of the really cool neon signs for Reno, Nevada would be from the 1930's-60's. Now I've been tagged before as Mamie Eisenhower. Yep this is the hairdo and clothing style of that period. I chose this dress to fit into the time period of the neon signs. 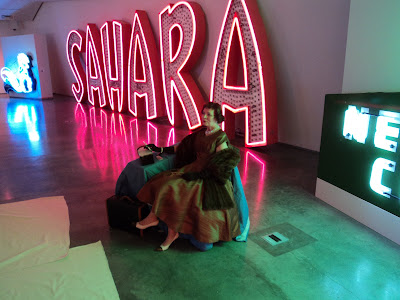 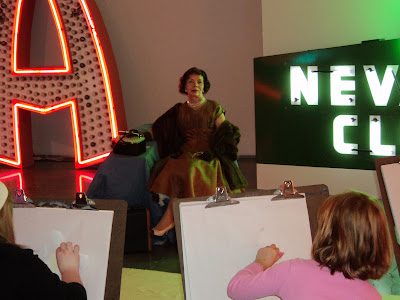 I was recently asked by a friend to recreate her grandmother's apron. She wanted a unique gift for her sister's birthday. Maybe it's me being nostalgic as I turn the years over, but it seems several people my age and the age of my daughter long for the good old days. There is resurgence in knitting, crocheting,  planting gardens, canning and having "comfort clothing" in our life.  By comfort clothing I'm talking about a phenomena that is similar to the cliche "comfort food", we are all familar with that phrase. But "comfort clothing" is that connection to the past and several sites, pattern companies and craft companies have aprons such as our grandmothers wore. 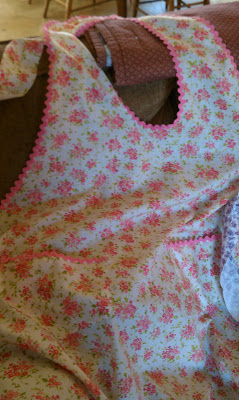 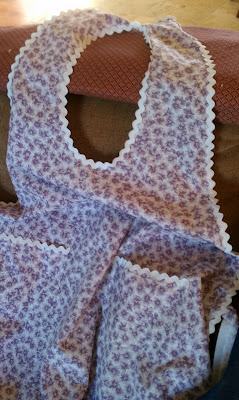 I love it when I put on this type of apron. I wipe my wet hands on the apron, not jeans, I stuff pins and pens, rubber bands from the paper, penny off the floor into the apron pocket, not jeans. I feel this pull to past memories of my mom and grandmother doing the same type of activities, I'm at peace, my life is full, I'm wearing jeans, tee-shirt, flip-flops, and an apron. As long as I don't have the housedress with my hose rolled down around my ankles like grandma I'm a housewife fashionista.
No comments: